Faith Neslson goes to jail, BoobsRealm at the AVNs, Angela White and Lucy Wilde together? 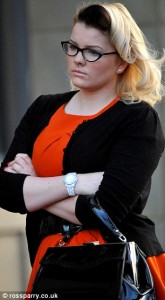 Do you remember Faith Nelson? Yes, that one, the blonde bombshell with humongous juggs. She disappeared after her faithexposed.com website to only do some glamour model under the name Denisse Bell. Faith, real name Lisa Bell, made the news this week when she was convicted, along her mother and other ladies, for scamming a 91-year-old Parkinson sufferer out of £500k. BoobsRealm.com visited the AE expo. I had a good time, but also a bad time. I will post in a few hours a story of my adventures and misadventures. I went to do video interviews but many things went horribly wrong. Some were under my control, whereas others where a sum of unfortunate events. Anyways, stay tuned for some great news and interview!!!!

Speaking of news, Angela White was one of the girls I was able interview. AngelaWhite.com won the Adult site of the year in the performer category. Congratulations to Angela!! well, the breaking news is that she stated that for this 2015 she is looking forward to shoot with the top busty European girls. Yes, now we need that the powers that be agree on this so we see Angela White shooting with Lucie Wilde, Sensual Jane and Katerina Hartlova….. Viola Baileys, don’t you wanna come back??? “Yes, now we need that the powers that be agree on this so we see Angela White shooting with Lucie Wilde, Sensual Jane and Katerina Hartlova”
=> some words are either missing or there are to much.
Anyway, that guess is quite a long shot for lucie (knowing she has shoot nothing for months).
Her DDF contract has to have an exclusivity clause (maybe that’s why the bustybuffy site doesn’t update anymore) but that does not mean she will shoot “new” stuff

Thanks.. well let me know what should be the correct way to say it. English is not my first language, but need t master it this year

I won’t be able to tell you the correct way, cause I really don’t know what you where trying to say…

Was it that “we have to hope the girls she was talking about were Lucie Wilde, Sensual Jane and Katerina Hartlova” ?!

No. I meant that we hope that the ones who run things allow Angela to shoot with those girls

You had it right the first time. I think the first commenter was confused by the phrase “powers that be”. But I have no idea. It was perfectly clear to me.

Hope everything’s all right! Looking forward to the AVN updates

wow,, as you know im a huge faith nelson fan… disappointed to hear this… sorry I haven’t visited for a while but my tablet has got bust so im temp on a lap top.. can you e-mail me again please so I have your address many thanks… im looking forward to hearing about your expo.. wow what was angela white like to meet???