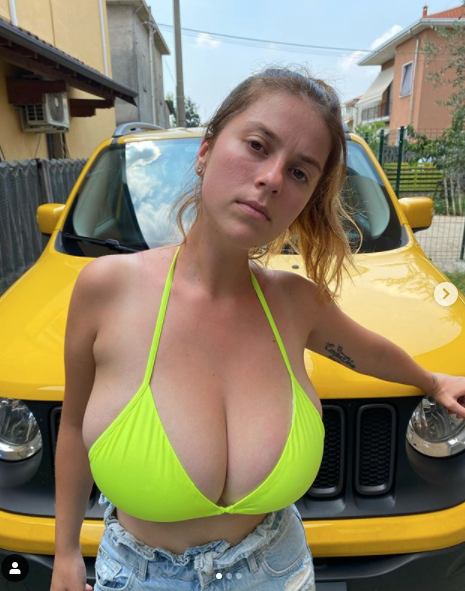 Instagram is the source of many big boobs findings. Mady Gio, Adiel Grech, Mati Marroni Nina Phoenix aka Tamara Dido and Sannatorr are the top 5 non-topless busty girls on Instagram.

At the end of the post you will find a poll to vote for your favorite one.

Mamma Mia! Quanta Tetta! The busty Italian @Mady_Gio has close to 190K followers on IG at the time of the writing of this post. Mady is a young Italian babe who got famous due to some tik tok videos. She knows she owns one of the most amazing big natural racks to ever walked on this Earth.  Mady is not interested in showing her peak twins anytime soon. I wonder if she might have a surprise for us when she hits 200k.

Below a video of her poor hardworking bra making an effort to stay alive! IG https://www.instagram.com/mady_gio/

Poor bra being abused from r/tiktokthots

Israeli/Canadian Adiel got super popular last year when she was the runner-up of the Canadian Maxim Cover Girl Contest. Still this short and bosomy beautiful girl was already a winner. Genetically gifted, she knows she has what it takes to take over the world.

Apparently Adiel also sings. This video below focus her vocals but also her pronounced cleavage. Because the young Canuck knows w are looking at her BIG EYES!

She has over 500k followers on IG. https://www.instagram.com/adielgrech/

The controversial Mati Marroni could not be excluded from the list. Whereas we cannot be sure which is her real account and who is fake we can attest for a fact that her boobs are real.

Mati shot for StonerCaliGirls before starting to tease and do baits and swtich in topless photos or videos. Still, people are following closely all possible real and fake accounts in order to get some full naked tiddies.

I was following one of her official accounts and then another girl popped up on that account. It seemed like the account was grown and then sold.

Some guy made a compilation of Mati here

Busty non-nude model Nina Phoenix rebranded herself after being known as Tamara Did. Nina has some spectacular naturals and a nice overall body and face. She is not willing to pose topless. She knows her big boobs topless are a holy grail to fans and they seem to like the mystery.

Busty Spanish. A dream come true. Sanatorr is a girl residing i Barcelona who went viral on twitter a few years ago.
Here you can vote. it is hard for me to rank them. But maybe you can help me.

Below the video that made me fall in love with her. Follow her on Instagram for more photos. https://www.instagram.com/sannatorr/. Over 422K followers guarantee the satistfaction!

Now time to vote. Who is your top Non-busty girl fromt he list?

Queen Milena Velba: J cup approuvé. Tamara Dido aka Nina Phoenix: R cup. They must stop their delirium over their measurements. Of course she has a big breast, but why invent such cupsize?

I voted for nina phoenix, it would be a waste of time waiting for topless from the other girls you mentioned.

Dude you should take a look at Shahar Matok from Israel. She is amazing, little chubby but still incredibly sexy. @shahar_matok

You have to watch @__anneris__ on tiktok. Biggest I’ve seen there.

What’s happened too Boobsrealm, use be a good site always one of the first to break news and gossip, now not a post for over 3weeks, has the heart gone out of it? We seeing the death of BR

Hey man. please check your cache. I am posting every day

I had the same issue too. I saw it updated this morning. Thanks!