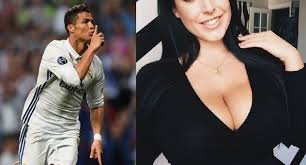 Cristiano Ronaldo may have not won the 2018 FIFA World Cup, but he might have gotten a bigger and hotter trophy. No, his transfer to Juventus is not that amazing. The Portuguese footballer Cristiano Ronaldo fucked Angela White after a party in Sydney Australia. Read below for more details. Miss Angela is the one that leaked the news to a European online magazine. The original post was in another language, but the following excerpt was translated on an english online tabloid:

We met at a celebration in Sidney and in fact I was the first to flirt with him. After the party, Cristiano invited me to his suit and spent the night together. Only in the morning, it was actually lunch, after we woke up too late, he learned who I was and he preferred not to hold contacts, “Angela confessed.

The original news were taken from http: //www.botasot.info/bota-e-yjeve-showbiz/846504/angela-rrefen-romancen-me-ronaldon/.

While we do not know how many goals Ronaldo scored in Angela’s holes we are pretty sure she was destroyed as the German team destroyed Brazil in the 2014 World Cup.

What do you guys think of the news? I think these might be the biggest natural juggs CR7 might have fucked LMAO, the dumbest site have ever seen, who’s Angela white compared to the CR7 of the world, am sure she’d be the one happy fucking the great CR7.
I don’t believe that crap anyways

Use social status as a criteria to fuck someone is a woman/faggot thing.
REAL MAN decide it by the size of the TITS!

Kim Kardashian went speechless when asked what would it be like to have a kiss with Cristiano Ronaldo, so who the hell is Angela White that is a bigger trophy than the World Cup? Cristiano Ronaldo move to Juventus pop up a sum around $70-$90million with his official Jersey sold within the 24hrs of his transfer, I wonder how much Angela has made in adult movie in her entire lifetime.

LMAO. The saddest thing have ever heard, I would prefer to fuck “Angie Verona over Angela White