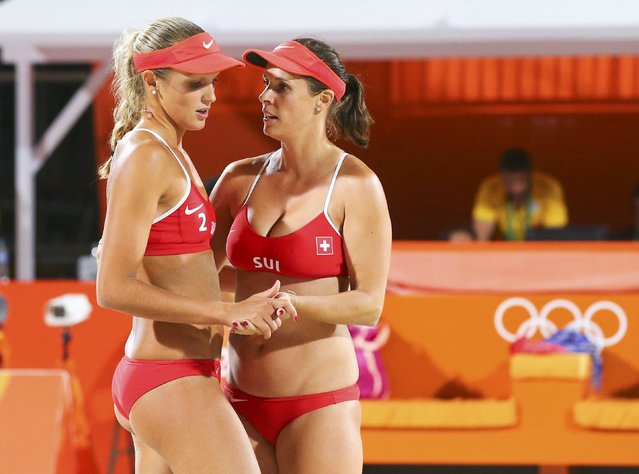 Everybody goes crazy about 2016 Rio’s Olympics. If you haven’t by now, I give you TWO big reasons to turn on your TV and enjoy the tournament. The reasons are more than two, but the girls listed won the Big Boobs Olympics: Isabelle Forrer, Sania Mirza and Rosella Flamingo have the best big boobs in the Olympics. What do you think?

Isabelle Forrer: People usually expect big round butts while watching beach volley. There have been quiet many in the Australian team, Brazil. However, the internet just went crazy for busty Isabelle Forrer from Switzerland.  No doubt that Isabelle Forrer is the Gold Medalist on the Big Boobs Olympics. Rossella Fiamingo: The beautiful Italian épée fencer has already won world championships in 2014 and 2015. Rosella started as a gymnastic, but as we all know usually girls who practice gymnastic and swimming are flat chested. As a result busty Rosella Fiamingo found a new love in fencing. The busty Italian gets the Bronze medal in our Rio big boobs ranking. Michelle Jenneke: Shelly is an Australian 100m hurdler who not only turns heads because of her skills but also because of her good looks. While she is not that busty, she still has a wonderful chest. You can also look her from behind and still fall in love with her. Shelina Zadorsky: I have to say that I love this girl. She does not have big boobs, but that face is one of the prettiest in the Olympics. All sites list her among the most beautiful athletes and rightfully so. The Canadian soccer defender saw the red card in the first game of the tournament, but got back to the team after serving a one-game suspension. Don’t let her SUPER CUTE looks fool you, Shelina Zadorsky is a tough defender. She has been a key player in helping Canada reach the semi-finals. Other busty girls you should google

There is no dun that the tournament features countless hot girls. I did my research and the following are non-busty cuties you have to see. Those genes are just from other planet!! Take a look at the hotties: Amina Kajtaz, Aly Raisman, Dafne Schippers, Kassidy Cook and Darya Klishina.

Bonus: Former busty Romanian tennis player Simona Halep withdraw from participating at the Olympics. Simona Halep used gto have impressive DD’s, but she decided to get a reduction as her big boobs were not helping her out when playing.  Below a tribute video to the “fallen”.

Thanks! Leryn is a hot girl and has nice boobies!