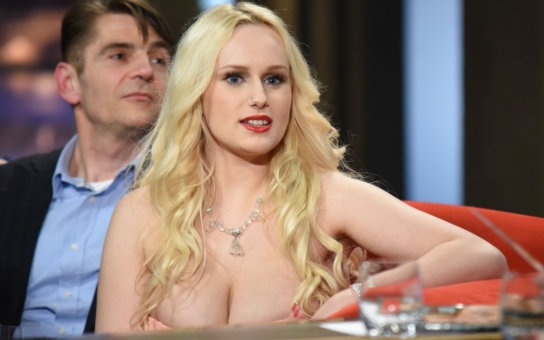 Busty blonde Angel Wicky keeps on making waves in the mainstream media. Last week the bosomy czech pornstar and playboy playmate was invited to one of the most popular shows in Czech and Slovak: Show Jana Krause. In this show, which has huge ratings in both countries, the host invites celebrities to talk about their projects. Angel Wicky was invited as a result of her playmate work for playboy. The host was very impressed with Angel Wicky’s beauty and size of her boobs. He could not avoid staring at her giant chest. Jana Krause is also characterized for playing jokes on his interviewees, but Angel was smart enough to make the show even funnier.

Below you will see a translation from two mainstream media articles from Czech Republic has picked up from this story. Also a teaser of the show and the full interview. I think it is worth watching. Even though the video is in czech you can guess what is happening and have fun! Czech Playmate embarrassed the boys from Paticka (comedia tv show) and Jan Kraus( biggest teathre and TV show in Czech and Slovakia)
Her Lush fives in the giant neckline was attracted them like a magnet.
Popular Playmate, cover girl and director of ticklish films for adult audiences with the stage name Angel Wicky (23) Collect ssuccess, especially abroad, where there is  unusual interest is her.
Recently she was the first Czech model posed for American fashion magazine Modelz View a few weeks ago she revealed her lush breasts in the UK pin-up magazine Tease and Cake, for which stripped also  famous striptease artist Dita von Teese.
No wonder that this blonde exhibitionist got into the viewfinder of moderator Jan Kraus, who invited her to new part of the talk show Show Jana Krause.
“It was a great experience and it is a great honor for me that I was invited.
The audience and guests were amazing, it’s hard to talk to someone who is total ironist and who is jumping into your sentences and speech,” hinted at a sharp tongue of Jan Kraus Czech Playmate, which embarrassed and Richard Genzer, Michal Suchanek and Ondrej Sokol ( Particka).
Kraus invited boys from Particka to his talk show  to talk about the new movie call Dodgeball, where all three play roles. But Suchanek and his friends didn’t know many times where exactly the focus of their eyes was. Angel Wicky cleavage was dangerously close, which even moderator had to notice and look.