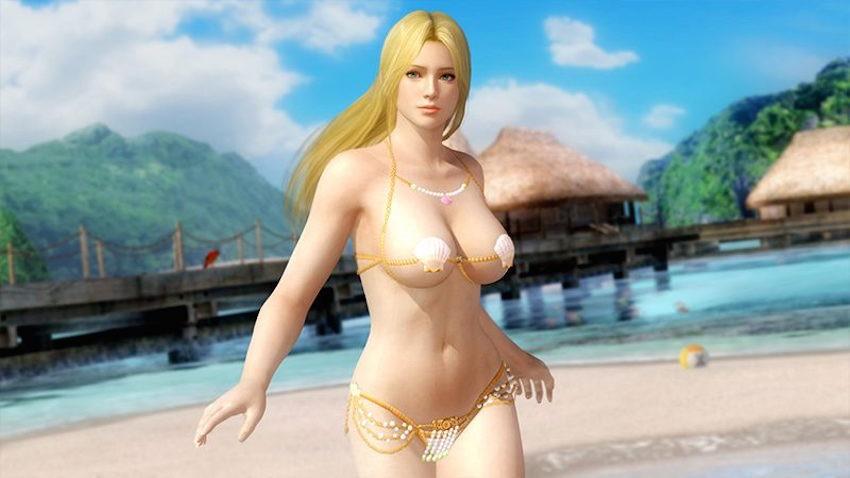 If you’ve ever played fighting video games, you probably heard about Dead or Alive. Thi series had its beginnings in the nineties, and the latest, sixth edition was published in 2019. While the core game and graphics have changed over the years, one thing always stayed the same – boobs. When you mention juggs in video games, Dead or Alive, with its roster dominated by females, is always on top of every list. There is something for every taste here, ranging from barely legal Marie Rose and Honoka to busty babes like Helena Douglas or Tina Armstrong. With a selection of top-heavy MILFs from other series such are Mai Shirunai (Fatal Fury) or Rachel (Ninja Gaiden), there is something for everyone. While the pressure was high for Dead or Alive 6 to tone down its famous breast jiggling physics, the Japanese team insisted it’s a part of their legacy, so nothing changed. While default costumes are indeed more conservative, you can still get these babes in bikinis and enjoy the sight. After a match ends, you can even freely rotate the camera and see every detail. There is no fan service game for big boobs lovers like Dead or Alive 6, not including those excellent Free Adult Games. What makes things even better is that there is a Nude mode now for the PC version. All you need to do is to download SaafRats Nude Mod, and since it’s only 70 megabytes and easy to install, there is no reason not to try it. The only thing we suggest is to make a copy of files that are modified or reinstall the game if you have any troubles. While there are some bugs, users are generally very satisfied. All models are made using original assets for the game, with minor customizations needed. In action, everything looks fantastic, as boobs are uncensored as well are pussies. Of course, you can still use regular costumes, as this is just one of the alternatives. You can even use nude characters while fighting online, as your opponent will still see your character in regular costume. So what if you are not good at fighting games? That doesn’t matter as Dead or Alive 6 is easy to play, and now even has auto combos that will make you look good even when you play for the first time. There is a superb practice mode that will teach you all about the game, but you will still do decently in a single-player story or arcade mods. Find a beginner-friendly character, and you’ll enjoy the action like you are playing the best Sex Games imaginable! The only negative thing about DOA 6 is its DLCs. They are incredibly expensive, so buying every additional character or costume will cost you around 1500$, which is insane. Still, since you can download nude mode for free, why would you even need them? So get the basic gaming and have fun! Why Husbands Cheat On Their Wives

MILFs That Dominate The OnlyFans Platform

I can definitely confirm this. I own the DOA games on PC and PS4 (DOA5, DOA6, DOAX3, and DOAXVV) and the mod community for those games are strong resulting in a lot of nude mods and sexy for the very busty girls. i’d argue that playing DOA as a kid many years ago is what developed me into the boob man I am today. I’m glad the series is still going on and is as unapologetic about its love for busty girls especially in this PC culture we live in nowadays. the devs of this game should be supported so… Read more »