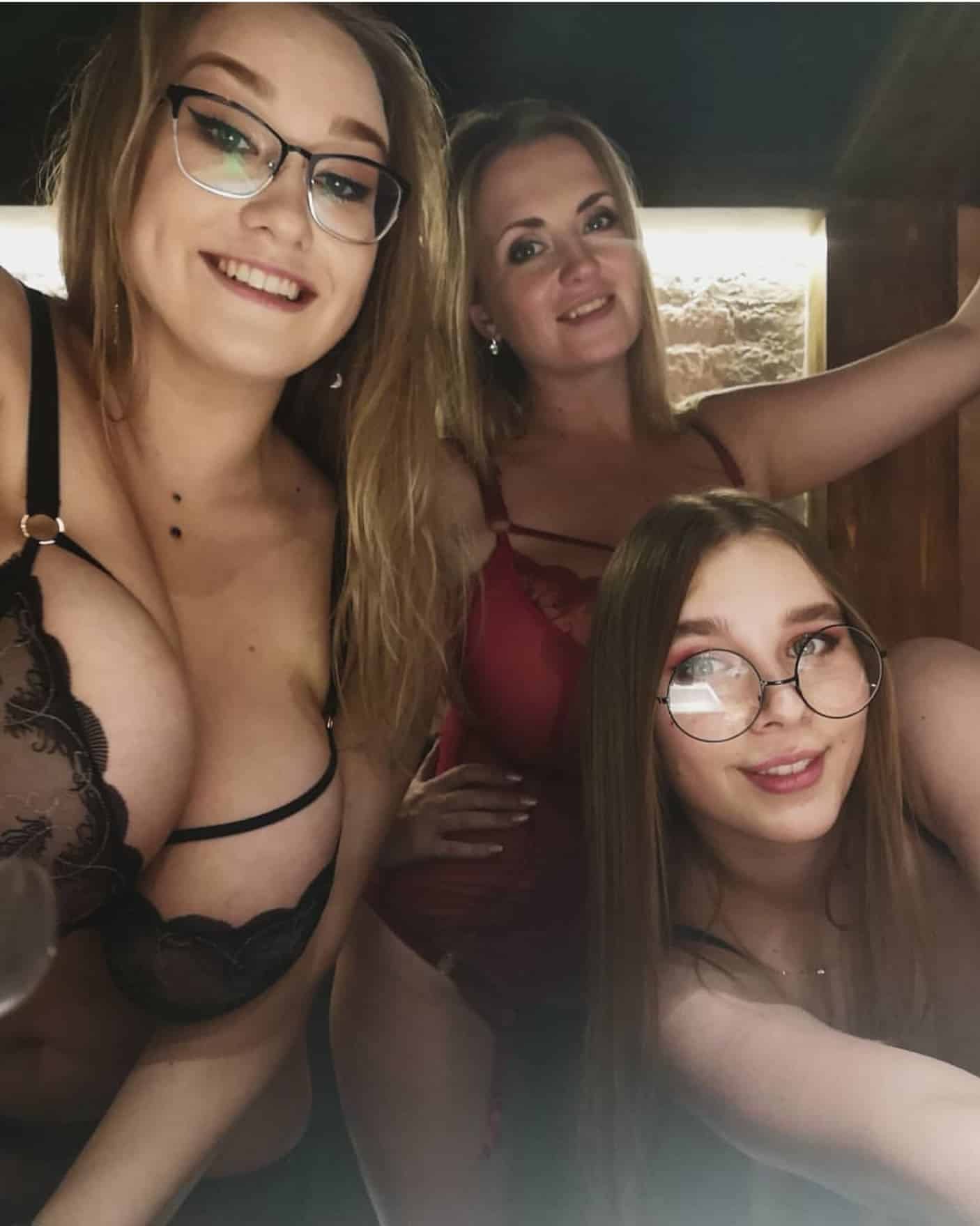 Many of the top busty models in the world as well as some new faces for many joined to start the #DontRushChallenge. The likes of Sha Rizel, Maria Body, Demmy Blaze, Codi Vore, Xenia Queen and many others worked together to make this fun video. Amazing video by the Big Breast Team

When we talk about big boobs community we think of us as fans; however, there is a boober community called the Big Breast Team where many busty girls created a bond and are in touch about many different things.

The video presented today is a very fun video created by the best busty girls in the world doing the #DontRushChallenge where girls pass a black tong from one to another. When each girl receives the song the girl just woke up or is not ready. A couple of seconds later after approaching the tong to the camera, the tong zooms out to reveal the busty girl with make-up on and sexy lingerie. The model then passes the tong to another busty model who is in another part of the world.

Here the first video they made -with a smaller roster-

A lot of coordination and a lot of editing in this video.

This is the second video made by the Big Breast Team. In this video I discovered Olya Steykina, who has a very pretty face. big man mades, bu the girls is nice. She is the only girl with no natural breast. For some also Brooke G might be new, but I have been in touch with her for a while already. We also learned that Luna Amor’s tits have gotten bigger. I would have loved to see Adriana Fenice, Beth Lily and Tessa Fowler on this video.

Many of the girls have worked for Scoreland and Pinupfiles. I would love to have many of those added to the BoobsRealm Onlyfans roster.

The girls on the video and their @ at instagram are listed below:

Tessa Fowler is on onlyfans. Problem with onlyfans is you dont know what are you paying for. Problem is not to pay but to get what you paid for, If she goes full naked i would pay for that, if she goes only topless thats ok and i respect her limits but i am not interested. Any info of levels she goes on of would be nice.

if we could at leasts scroll the profile and see bluried photos, we could have a hint of what we are paying for feel more secure about joining it.
but… onlyfans doesn’t care, they didn’t even develop a phone app. improving their website is to ask too much.

but the biggest issue with onlyfans, is the “pay to unlock” feature. basically, models sell extra stuff at ridiculous prices, 30 or 50 dollars for a 5-minute video. that put me off from onlyfans for ever

I do agree onlyfans should have the preview option. But it is what it is. Sand for the ones who complain about the DM. It does not matter if 1 or 200 people complain about beth lily. She is getting several hundreds of members who do lay the extra. Several! So if it works for her and other girls there is no reason for them to change. Beth lily makes in a year just on OF what the CFO of a big start up makes. I’m not saying of a bank. Just a huge start up. I have seen her… Read more »

I have watched this video in its entirety and I found it to be very cool! They did an earlier video in light of the COVID-19 pandemic – besides passing a thong to each other, they passed along the soap. And remember to watch your hands!

I like the camaraderie! Keep the videos comin! A girl I would add to future videos? TESSA FOWLER! As a mtter of fact, I was waiting for/expecting Tessa to show up in these videos..

Many of these women are mothers and have nice bodies after their first kid.

What Boobsrealm says about onlyfans is true but consider this fools pay for their content, smart guys don’t. The girls complaining about this make me laugh we owe them no loyalty or money remember this guys.

I agree. There are some onlyfans worth the money, but most fall into the Beth Lily range. If I have to see her topless (don’t remember her doing fully nude), I can look up pictures of her. As Boobsrealm pointed out, if a woman has a few hundred paying 20 dollars a month for easy to make pictures and videos, that is a couple of thousand (before onlyfans cut) for little to no work. No incentive for her to do more. This doesn’t include amazon wish lists that losers buy things from.

Definitely a lot of overweight girls in the Covid 19 clip. We can only remember the days of Merilyn and Jana Defi these fantastic bodies don’t seem
to exist nowadays.

Agreed! This video is heavy on heifers! I think it serves as an excellent milestone in how far the big boobs genre has tanked. A similar video in the 80’s, 90’s, or even early 2000’s would have been almost exclusively fit busty beauties. Thank militant “third wave” feminism for what you just saw. It’s not just the heifers’ fault for feeling “empowered” either. It is all of our faults for settling to jack it to overweight women. If we men kept our standards, free market forces would deliver more fit, busty women due to supply and demand. But if all… Read more »

Had to mute the video. That “music” is HORRIBLE! I do wish these women would stop messing with the surgeries. Their faces just look distorted and cartoonish. The only improvement is their plastic surgeon’s bank account.

That awful music is why I stopped visiting camshows. I have no desire to listen to Kanye Wesy blasting while a woman masturbates.

In this era of people obsessed with gyms we should be seeing more toned busty women but then those types tend to get educated, have self respect and marry normal guys. Yes onlyfans can make you rich but these girls destroy whatever proper career they could ever have and will never enter politics or work for the UN. By the time they are 35 it’s over.