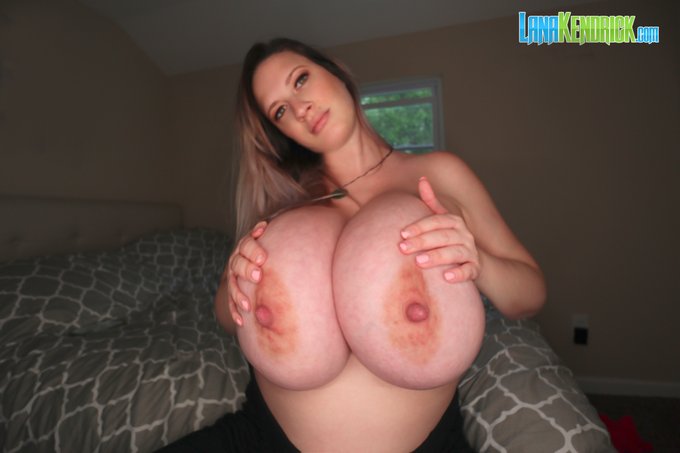 This weekend I will be recording the last part of the AMA for the final episode of the Podcast.  I already have some questions and answers ready. You should not miss it.

So Instagram deleted the BoobsRealm IG and the backup account at the same time. I also discovered there is a cat fish who is impersonating me. I guess I made it lol. The IG censorship will be addressed in another post. Many busty models have been censored for bikini photos.

Lana Kendrick is shooting pregnant content for Pinupfiles. Who will release the videos soon. They already have released some already. You can see Lana’s gigantic boobs! They were M cup before. Now I think they break the alphabet!

Some of y’all are real pricks lol. That’s why I don’t go on Reddit anymore. So much hate in this world. I don’t make shit up. pic.twitter.com/6JvEPCyY1t

Speaking of more huge boobs. Codi Vore continues her crusade for Social Justice. A while ago she made boob growth videos mocking Tomi Lahren. Now she is just tweeting liberal-oriented tweets and RT’s. We can infer she is voting Biden.

Getting back to Lana Kendrick and Yesboobs. Not that they will work together anytime soon. I just wanted to tell you that YesBoobs will not be featured on the site going forward.  They basically blocked my affiliate links and were not happy for a while that I was not promoting them much.  I honestly think their best content is that shot by Samanta Lily and Demmy. I have promoted also Nina NIghtbloom’s debut, who was presented before her real debut for BoobsRealm.  There has been some rocky relationship with Yesboobs starting with Anna Blaze, who way before she was Anna Blaze was promoted on this blog. YesBoobs offered her a shoot after that and Anna just no-showed to go to a Hillary Rally back in 2016. And all of a suddent I got a tweet saying that “my protege no showed” I had no idea they were shooting, let alone I was responsible for that shoot.

Another issue was when they called out Lana Kendrick for a “fake cancer GoFundMe”. They wanted me to go out there an trash Pinupfiles and Lana Kendrick for the fake photo posted. When I asked about the situation to PUF, they said that they supported her and got the news from her. I was never able to confirm or deny what happened.

There were a few others that created tension between YesBoobs and Boobsrealm.. well not on my end. But the promotion for their site is over as they are no interested in getting traffic due to my lack of promotion of them.  I wish them well in their future endeavors. You know you can find them on Yesboobs.com.

Join Pinupfiles at 50% OFF

Another big story is the famous Matti Marroni. She has been very popular online. The story we know is that the photos have been posted online for a while. No nudes, just tease. The information on forums was that she turned 18 this year, so most sites did not want to host their photos.  What makes the story more complicated is that there are several accounts that claim to be her.

Honestly, there is no checked data on Matti Marroni. She seems to have posed for StonerCaliGirls this year -which also features Julia Burch, Kendra Rowe, Mila Santos and others. However, from my experience seeing. online accounts, there is something fishy in the story. What are your thoughts on the Matti Marroni story?

This is from the most well known account…. why would there be so much secrecy about a busty girl in 2020? Draw your own conclusions… what is your theory?

Always cracks me up when my man makes random asides on politics. Codi was and is a Bernie stan and has come out against Biden’s neoliberalism repeatedly. A Biden vote is doubtful at the very best. But hey, yeah, all leftists and libs are the same, right? Lol. Like, why are you even commenting on this shit? We get it, you like licking all the boots, but could you actually save that for a place where men’s dicks aren’t out?

Ah, yes. How dare he try to get into the brilliant mind of someone who tweets “What do you think are the odds that at some point in my life I’m going to drink my own piss on purpose?” and bemoans those awful conservatives who won’t “where” a mask.

Could you save your white knighting for a place where someone gives a shit?

That was one of her tweets. She’s a bit of a dim bulb.

My dude, that’s exactly it. Why is he trying to get into the political leanings of literally any of these people? Leaving aside the fact that he’s got it entirely wrong, you think anyone “gives a shit” who she’s voting for? Could’ve sworn this site was about boobs, but my dude just slides in the most extra shit, completely unprovoked.

It is about Boobs. However, you have to consider that a lot of American and Western European girls are getting into political comments and blocking people who think different. And that is why the post is here

And yet you’re notably ambivalent about something like Ryan Madison’s rape charges. “Are these dozens of women’s accusations credible, or are they looking for attention? I have absolutely no opinion, totally just presenting both sides of the story.” Even if, for example, Codi and a MAGA MILF like Anna Bell Peaks disagree on policies, you’ll find plenty of agreement among performers regarding things like on-set rape. Yet you have no opinion? But when AOC or Siri clap back at you on Twitter, you suddenly become a free-market understander who’ll set this younger SJW generation straight. Kinda funny, isn’t it? Almost… Read more »

Because accusing someone of something is not to be taken lightly. Check out what happened in pro wrestling with Enzo Amore and also with Matt Riddle. Fake accusers. I am not defending Ryan madison, but I posted the full unedited clip that he posted online and made it clear that from what we saw and heard there nothing seemed wrong. Have you seen the outcome of the #speakingout movement in pro wrestling? Yes some wrestlers were pieces of shit, but also other guys who did nothing worth of big punishment were thrown under the bus: Sammy Guevara as an example.… Read more »

Nah, I’m well aware that this guy goes in depth. That was never in dispute, and props for how diligent he is in following up. What I’m saying is that if you bring up fairly baby-brained free-market and/or conservative takes and don’t even get the irony in quoting Orwell to make your point, you should absolutely expect that it distracts from the main point. Which is, by the way, actually tits. One might even dare to suggest that the political shit and the actual porn could be split and categorized into different parts of the blog, not unlike what Codi… Read more »

You aren’t alone, prawn. I’ve called him out on overly stating race and such. Waste of oxygen trying to talk about it, honestly. Don’t bother. I come here for the boobs and wish that was all he posted, but ultimately it is his site and he can do whatever he wants.

Well. About this MATTI stuff. I was following her back when she claimed she was “16” and that original account died out sometime in the middle of 2019. As in stopped posting anything… Then the fakes or whatever started. My understanding from a friend that works in the entertainment industry that I know quite well (and he knows my big boobs FETISH! from Houston) said she was shopping around pictures before she was 18 that were in his “words” jail FN bait. He dug further and even speculated that her age is not 18 but rather in her very early… Read more »

How did he get the age confirmation? Nothing has indicated she is in her early 20s. I could be 100% wrong, because I am not the person with the best knowledge. Long-time producers or people involved know more, but from wh I can see I am not even sure if she really uses twitter or instagram at all. I know a very very very famous case of a girl who used to be a youtuber and did porn. She is well-known all around the world…. she signed a exclusivity contract and she gets paid a few hundred bucks a month.… Read more »

Again… I wasn’t the source of the information it was what he told me. For clarity, he is not in the adult industry. I am not either. We are both in the entertainment industry though. Different parts of it. However, during a stop there I once showed him what at the time was for sure DEFINITELY her personal Twitter account. He recognized her as someone that tried to get into music videos particularly RAP VIDEOS as a side/dancer/talent. He then later that week told me, that the thought was she was a little bit deceptive as far as her age… Read more »

Here’s a picture from that twitter account I mentioned around October 2019. If I can start my older phone I’m sure there’s more on that one. 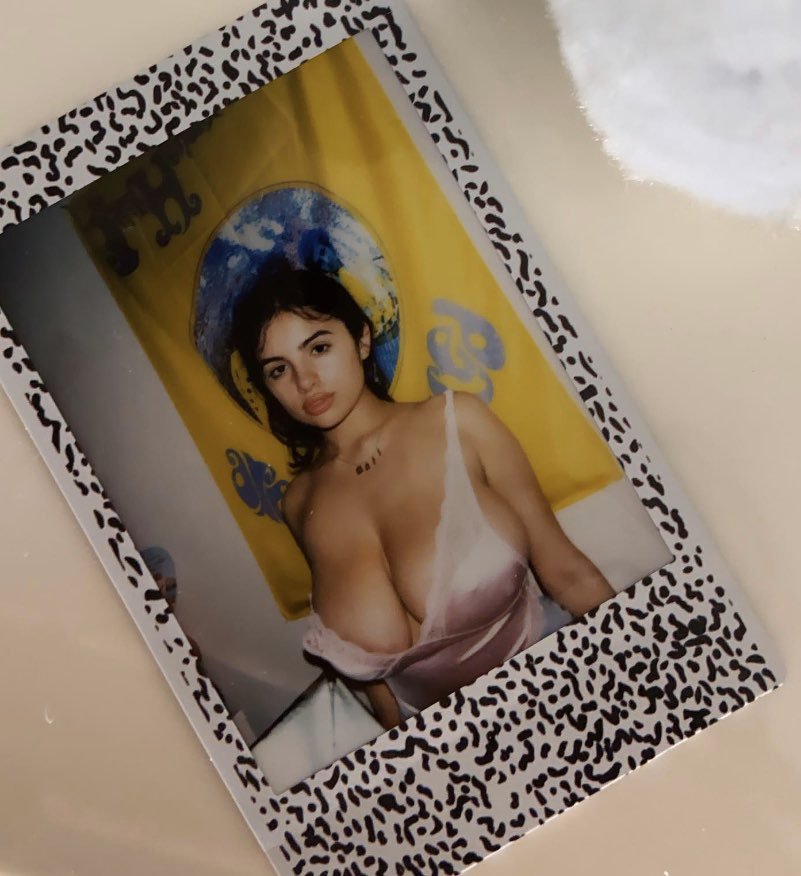 Interesting… Please e-mail me.. would you be down for a Podcast chat? I think it could be a fun talk.

wheres anna blaze these days, has she any SM profiles at all, she seems very flighty

She quit her agency… she she was working for one of the worst agencies there are…She was mainly getting fucked by the friends of the agency and mostly working IR stuff.
She is not interested in working with /for anyone after that experience.
Everybody knows she is 420 friendly.
Many fans get the gist of certain behaviour, but when you are a producer, certain behaviours make you lose money. So I doubt you will see her around… at least in a long while.

Obviously saying something like that would create issues. There are always rumors that girls in Easter Europe, Latin America and even in the States are forced to do webcam, but who knows.

Is it organized gangs doing the forcing?

There is a lot of speculation. But I have no idea

Would be good to investigate

The russian and other eastern europe mobs are also supposedly forcing girls to do cam work and giving them a fraction of the money collected. Live Jasmine is supposed to be one of those companies and full of romanian girls camming against their will.

I love how big Lana’s tits got through pregnancy. Especially that pic you posted makes her hands look small despite the fact that she is a tall woman.