MissBoobsRealm2019 and Best Busty Girl of the Year is 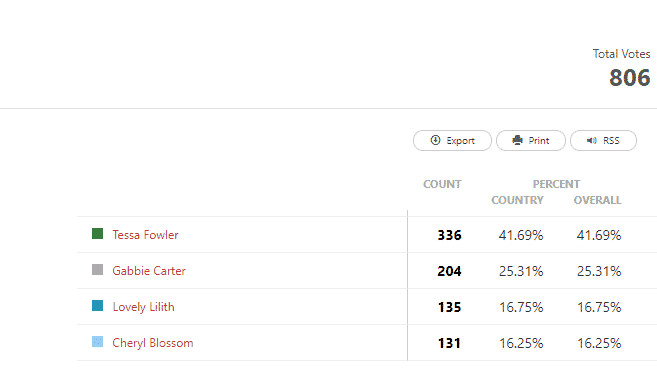 Tessa Fowler got  points from winning the fan voting. Two members of the Committee voted Gabbie Carter as the winner. The third member voted for Cheryl Blossom. As there was a draw, the third member was asked make a new pick between Tessa and Gabbie. This time it could be a controversial win, but a win still. Cograts to Tessa Fowler.

Below the fan voting. Anthony, long time collaborator of the blog voted Gabbie Carter as she is the pornstar of the year. I also voted Gabbie because, while she is not Lucie Wilde, I felt this was a 2014 deja vu between Antonella and Lucie, only that this time fans were voting for Tessa as a result of her past work and not looking at the whole year, where Gabbie was the one pushing limits. Still the draw was broken by NinersFan who has been a member of the Committee since its inception and also has collaborated with the blog in the past.

“A) fans but most importantly B) she still put in work so it’s not like she was absent and it’s  nice capper to the decade. She might be the definitive big boob model of an era. That being said, excited about the future and seeing a new girl go for the crown next year/decade.  Thought cheryl would be it, but maybe next year“.

Tessa is the first-ever 3-time winner. As a result she will get a custom t-shirt. Ideas are welcome! Also a coronation video will happen when she shoots for BoobsRealm in 2020.

Tessa has been one of the best of the decade. Let’s have Tessa celebrate and let’s wait for what 2020 will bring us! Congratulations Tessa! I love you!!!

Cheryl Blossom is my winner, Tessa is so boring.

Lilith had my vote. Her videos are far more inventive.

The way the contest was set up this year it was inevitable that Tessa would win. Many of the heavy hitters were all in the same group so they took each other out while other groups had no one outstanding in them and got a free ride. Of course Tessa would win.

I was expecting Gabbie to win. Actually I voted for Gabbie.

But why? Her boobs are not THAT amazing. She’s obviously hot, but I just don’t get how she was even this close.

Again, how does being a star make her the best in the boobs department? Her boobs are barely busty and they are floppy. I just don’t understand how she received a vote from two committee members who are boob fanatics. Angela White has incredible boobs- two VERY different boob types.

Well it is also about the content a busty girl has done. Gabbie has great boobs and has done great content because it is her first year.
If we talk about great boobs, Ewa Sonnet deserves to be considered among the top 5 overall. However, her work has been stale over the years. That influences the decision. Why does not body complain about perfect boobs such as those of Beth Lily, Lovely Lilith, Harmonic div not making it to the top two?

0
Reply
On Hiatus
Reply to  Boobsrealm

It doesn’t make her a star. She’s just easy to book and new. Nobody is talking about her. There is no buzz. Doing lots of videos just means you’ve done a lot of videos. Compare it to mainstream movies. The biggest, most popular stars do maybe 1 or 2 movies a year. Maybe none. There are many who go years without a new movie. Other lesser known actors/actresses do 5, 6 or more movies per year. Fan interest and excitement is not directly proportional to how many movies or shows you’re in every year. Quality > Quantity. As the newness… Read more »

the only thing more repetitive than Tessa winning miss boobsrealm, are her boring ass PUF vids.

shes next up for a boobsrealm shoot and she wins miss boobsrealm?!?!? Shocking, I tell you. Just shocking.

Love Tessa, but Cheryl is my favorite this year.

Long live the queen of boobs and amazing personality.

Tessa is the Lebron James or Michael Jordan of busty models now. She’s undoubtably the most “talented”, and recognized as the best despite the season she had. She won MVP again this year, so maybe we should just vote for 2nd place. 😉

“Talented”? I’m not sure what’s so “talented” about taking off your shirt?

Tessa a deserved winner. Its a contest about tits and beauty and Tessa beats Gabbie (2 committee members voting for her over Tessa is a dereliction of duty) or Cherry easily. Its not even a hard choice.

Tessa didn’t do a whole lot or did the same shit she has been doing since she started. Fans just voted for her because she is Tessa and not for any real merit in 2019. Very pretty but boring. She is just overrated.