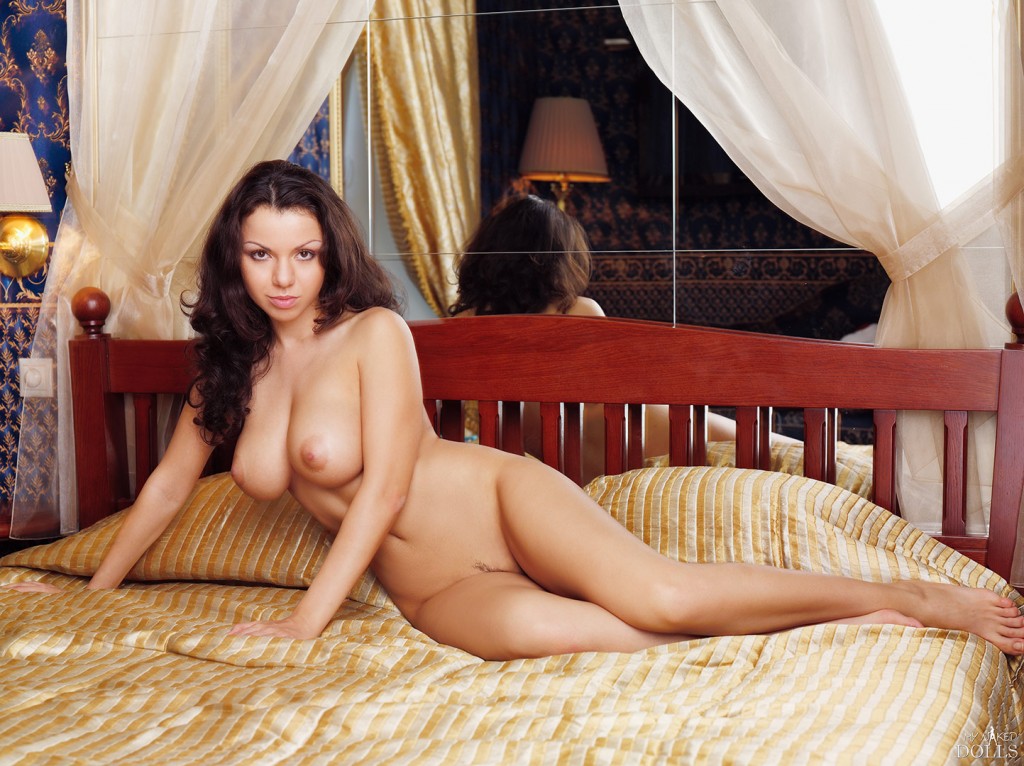 My Naked Dolls is a site owned by Tony Murano who used to work for Met-Art. My Naked Dolls brought us Slavka Solnechnaya aka Lilith Von Titz. This time I bring you Busty Aurora, who debuted on the site over a year ago, but was just recently brought to my attention. Check out Aurora on MyNakedDolls. This girl looks nice and has a nice pair of natural tits. You may have noticed that Alicia Linda photos were taken down on BoobsRealm.com. You may have noticed also that other blogs have deleted the photos. It’s weird that not all -I will not speculate more- but the story is the following. Ewa Sonnet and her manager -rumored husband- Phil are the ones behind her site and have been claiming copyright infringement when they found a blogger promoting Alicia Linda. It is clear that the macabre duo owns the content, but what we, the bloggers, do is promote their sites so these two make money. It is weird that a well-known blog has not taken down the photos and that they have not complained to freeones who also created a profile of Alicia Linda. This means that Ewa Sonnet and Phil think so high of themselves that they think they don’t need promotion.

Phil is the one who pretended to be Jane on Busty.pl. He shows up on Adult Affiliate forums claiming that she makes almost 300k a year with Ewa Sonnet’s site. Ewa Sonnet sends her newsletter promising BOLD crap and full nudes, that never satisfy fans. They run a contest 3 years ago or so to collect e-mails promising one fan would go with Ewa to Panama for a photoshoot. The winner was not announced, so now thousands of people’s email get Ewa’s newsletter.

If you are looking for Ewa Sonnet and Alicia Linda I apologize you won’t find them on Boobs Realm. Ewa and Phil attack all sites they don’t like and featuring them even if promoting them gives them the right to attack Boobs Realm and it would mean the closing of this blog. I don’t expect much from Alicia Linda. The girl is cute and has amazing natural tits, but they are managed by greedy, unprofessional and arrogant people. I hope Alicia Linda can fly away and work on her own, if she decides to stick to modeling, but I think that Alicia Linda will become another Bea Flora, Kate Bona, Gosha or Anna Jota.

I encourage you to visit sites that really care about fans and have hotter girls than Ewa Sonnet and Alicia Linda. Just check out the titty-master Cel play with huge boobs on XX-Cel. Remember that he played with Merilyn Sakova, Faith Nelson, Renata Daninsky, Joana Bliss, Lana Ivans, Sensual Jane and more huge tits on XX-Cel. Indeed Ewa Sonnet siti is a crap. I was a member of her site on few momnths and i give ups. She dont show anything, that we dont see before and notthing from this what we want to see. When cric her on twitter she banned me. So i dont recommend her website to anybody. I have hope what Alicia Linda make her own websiter far away from Ewa and “Phil”.

I really doubt it, but I wish Alicia works somewhere else.
I was banned by Ewa too

We should start a site warning people not to buy memberships to 3wasonnet.com

We should put all that information on the website and then tell people to make their own decisions but they should save the money and support better run websites with less greedy people.

I have gotten e-mails about fans complaining in the past; however, I don’t know if the vast majority is satisfied or not. It would be interesting to get others comments.

I suggest you this site then: http://ewasonnet-truth.tumblr.com/

I am familiar with that site. I knew about the kid rumor many years ago. I heard the story about the black guy, but that contradicts the rumor that she is married to Phil.
You have to understand that the problem with the internet is that many people post many things. There is no doubt that they treat their fans bad, but I am being objetive on this whole situation.

WTF have I just seen? Ewa’s website and content are lame and boring no argument there, but the only worthy reaction on it in my opinion is “whatever lass, I’m out”. Just unsubscribe and be done with it geez.
Posting screenshots of idiotic comments from anonymous imageboards, pigs in bikinis etc. It’s a case of a severe butthurt that is.

whatever you say Ewa

He is not Ewa. he is a loyal follower of the blog. I think that the more obsessed someone is towards a topic the more the comments lose credibility. I don’t like the way they do things, but the only think I can do is no supporting them. I have posted about the boring stuff on her site, but that’s just my opinion. She still has loyal fans. Not the hundreds of thousands that Phil claims she has, but probably some hundreds. BTW, Wait for my next post about Alicia Linda and how you can find her on webcam… yes…… Read more »

Bwahahaha. Anything else funny to say dude?

Yea I know you are laughing Dave, probably a sign that you are deflecting from bigger issues. Honestly, if you have to defend a nude model to the bitter end because of obsessed, you should seriously seek mental help. It’s not normal for a stable person to say what you did and I seriously am willing to chip in money for a therapist. I’m not joking around either, I’ve worked in the field for 15+ years and I honestly think you should seek therapy for your delusional thoughts on Ewa Sonnet.

Me facepalms. You sure like to write a lot of nonsense, but you also have a big trouble with reading. I repeat what I wrote there in the beginning: “Ewa’s website and content are lame and boring no argument there”. Keep that money dude you’ll need it with that same therapist you mentioned.
P.S. To clarify my position bit.ly/21ZcIBG the very first comment. You can skip it dude, you can’t read anyway. It’s for other people without comprehension troubles.