Before anyone says anything, just for the record, racism is demonstration of some mental traumas and society should work together and each member on their own so we live in a better place. Having said that, social media has been the place that we should avoid these days as there are many incendiary opinions and unfortunately unbased. However, I learned my lesson after a few interactions.

The first one was former busty top star Siri, who basically posted that she regretted charging more for her first IR scene -which was with Lex Steele, who also produced the scene- She said charging more was bad as it was maintening racism and etch. – check tweets below-.

I know that IR scenes generate more revenue. Many fans on the blog and on forums always wish such and such do IR. So it is obvious that for many peple watching a girl getting fucked by a black dud with a huge cock is a turn-on. So in my opinion it makes sense that the girl gets paid more. 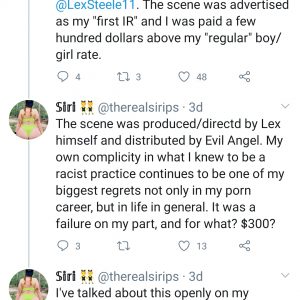 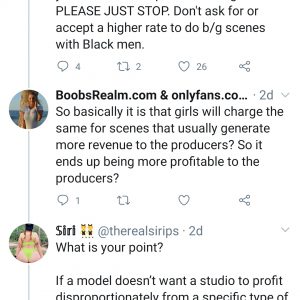 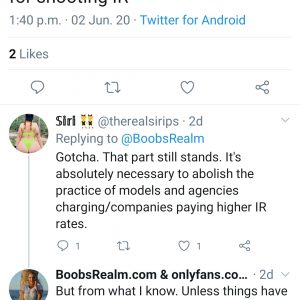 The following day Siri backed the proposal of paying reparation damages to all black people -13 Trillion dollars, which is around 333,000 per person, according to somebody on twitter- Siri showed her eagerness to get taxed for that cause. To this remark I added that if she feels that way, she should be donating her money already without waiting for a tax.  She went on with the reparation idea… My response was clear: Why would somebody in the present day have to pay -with his hard earned money-something that somebody else did wrong in the past?. Anybody that knows basic economics or anything knows that the only way a Government can get the 13TRILLION outflow is through taxes. And we are not talking about inflation and recession… So my legit question to understand what was the logic behind her idealistic ideas got me blocked. 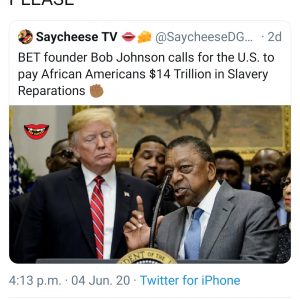 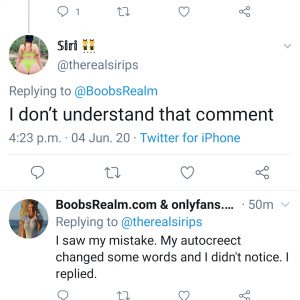 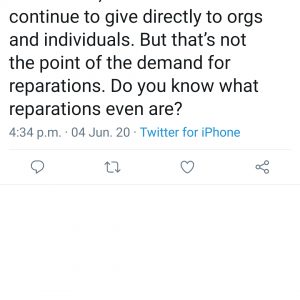 After that a guy I never heard of -and never will again- made a post about THE END OF PRODUCERS and having all the money to the talent. Which in other words sounded like Communism. He -and director Lee Roy Myers- said it was the opposite. However, for someone whose parents and family lost some property due to a communist regime that said -rich exploit people and the owners of the companies should be the employees-  those lines sounded very communist.

A girl who aparently has onlyfans and is a surfer came in to talk about the change of the system and how we were not in a free market. Yes we are not in a free market, but it is the closer we can get due to many economic reasons that are not to be added on the post. However, when I brought up the free market and supply and demand of OF she just retorted with the equality pay for women and other minorities. Again, I am part of visible minority and have worked in several countries and have hired several people under a structured corporate level I ave never seen those equality issues. Salary was based on experience and skills. So when bringing up her apparent lack of experience in hiring process or recruitment for structured companies I made the MISTAKE to say “real job” instead of “traditional job”. Unfortunately, I would have expected the person to understand the reasoning behind the claim. Yes doing adult work is a job, but it is not the job where you learn about hiring practices, policies, performance compensation, stock options , etc. So that one mistake brought the idiot mentioned in the paragraph above as well as Lee Roy Myers to scream and block me.

EDIT: As I was posting the story many girls started replying being mad that I implied she did not have a “real”job and all the women exploitation thing. The posting I was a fake content creator and blah blah. It is funny how much people can talk and whine about things they do not know. People just repeat what they hear but have no actual base.

Moral of the story avoid social media when you see a lot of people posting about what they have no idea about.  Another moral of the story, you cannot make understand things to people who want to be told they are right.

‘Having said that, social media has been the place that we should avoid these days as there are many incendiary opinions and unfortunately unbased. ‘

Boobsrealm begins the blog with this comment and then contradicts himself by engaging in the quagmire.

obviously the start of the post was done after everything happened.

If she’s serious, why does she charge at all? She should do interracial scenes for free. Actually, fuck that. She should pay them. On a side note…there are more slaves in Africa right now, today, than America had at its peak. She is a dumb twat.

Stupid cunt. So Africa has transatlantic plantation based slavery with the middle passage and a life expectancy of 3 years per slave. Ignorant wanker why don’t you go join the UN so you can join their paedophile ring on the continent.

But Lex and Mandingo do have specific DVD and movie releases where they are the feature. The whole thing is racist anyway no other country is as obsessed with IR as the US.

Siri’s opinion only carries the weight of her tits…which these days is pretty much nothing. May she enjoy her drug-addled ride down to obscurity.

After breast reduction and self destruction she’s not interesting at all.