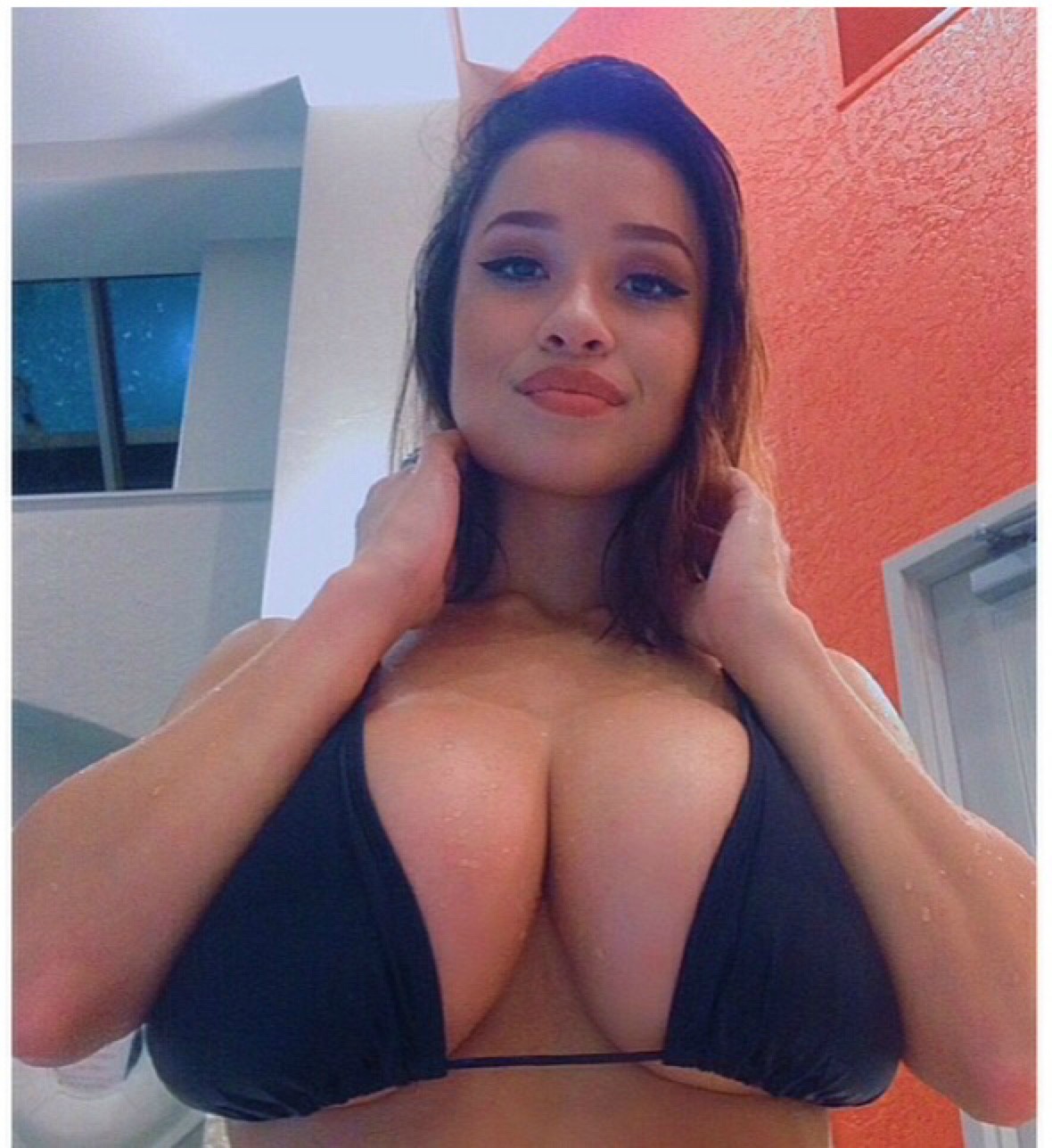 Huge busty fitness trainer Elizabeth Anne continues to ascend in the big boobs internet community. Yesterday the top heavy tits instagram celebrity became a trending topic. She works at a famous gym network in California. I am sure the sign ups over there have increased just to see those heavy monsters live!

Note: If you love Elizabeth Anne and love monster latina boobs I suggest you to take a look at Antonella Kahllo who won Miss BoobsRealm 2013 and 2014. Liz, as Elizabeth Anne’s friends call her, is said to be a nice girl who enjoys fitness and takes part in some competitions. It has also been said that busty Elizabeth Anne does not know how to handle this big boobs fame and is not remotely interested in showing her pierced nipples on camera. I heard, on the contrary, that she would be willing to make money going the Jordan Carver way. That would be pretty smart. The odds are in her favor and 2016 is her year, otherwise novelty will just pass by and fans will move on to another big boobs sensation.

Speaking of novelty and big boobs, Ewa Sonnet recently informed her fans that a new busty polish girl by the name of Alicia Linda is making her debut soon. Alicia Linda may be taking part on the Curvy Berlin 2017 calendar and may be going topless for Ewa Sonnet’s site. Busty Alicia Linda has big juggs, which seem to be the same size as those of Agnetis Miracle. It looks like Alicia Linda could become the next big thing -pun intended – in the big boobs community; however, she is managed by Ewa and Phil, so I do not hold my breath on this one. Regardless of that,  No one can deny how great this Alicia Linda is.

EDIT: Alicia Linda photos have been removed by request of Ewa Sonnet manager. Katie Savannah is the last of a dying breed

Dude, I hear a lot people saying about Jana’s breast reduction. But is there any reliable source about that?

Okay. Point taken, but where do you know that from? Did she tell you in some sort of interview or what?

Can’t give that much. You have to understand that if I end up spilling all the beans I won’t be given any info at all. So it is better than fans get a little of info than not info at all

Wendy Fiore think about it and now Jana confirmed. I cant believe all those girls doing reduction, that a sacrilege. There husband’s failed to take care of there back or they failed to get a caring husband! They should do more video at least before and wait that age take over a little.

I don’t think it is about the husbands. some girls do not enjoy having huge boobs

Be great to see more of alicia, as for liz she is quite incredible. Its a real pity she doesnt want
To get her tits out tho, the potential for her earnings is incredible

OMG alicia linda is amazing she has the pottential to be top busty model if she only moves to scoreland or at leats pinupfiles, ddf

can’t you just tell us if leanne made you take down the post or not?

Seeing Agnetis go hardcore would be AWESOME!I doubt it will happen though since she has never even shown pussy.

Ewa Sonnet and her webmaster are both fucking idiots. They are well known for complaining on adult webmaster forums for not making enough money despite claiming they make 250k a year. Greed is terrible, they made you take the photos down for GREED.

Yes. It is a sad story. They get promotion but stil complain and try to damage the blogs. I wonder if they attack the forums that share free stuff as much as they attack bloggers who are sharing and couple of pics and promoting their site.

Lots of polotics in the game which is not good

It can’t happen, cause A.Miracle has got a fiance and they get married soon.

Not every woman with topless pics must do hardcore. Why You can´t accept this. Modern hardcore is not nice to women. I can recommend to all women not to do hardcore. After that they are not be taken for serious any more and sites who want them will become more uglier than the sites before!

I agree that not everyone needs to. Actually some would lose their spot in the fans preferences.. however, it is a fantasy.
On the othe hand some girls have been stale for a long time and they do not represent what they used to.

I don´t like these rumors about Agnetis. Hardcore is not good treatment of women and everyone who loves women wouldn´t have this wish to see them in hardcore, without any safer sex! I know that models are tested before, but HIV can´t be hide from that! And everyone who wants to see a body like Agnetis body can watch Emilia Boshe at XLgirls.

They are rumors. Nothing confirmed. Everyone has an opinion. IN general, based on the Boobs Realm Legend contest and the Miss Boobs Realm yearly winners so far, it seems that fans like non-hardcore models better. However, the fantasy of watching them get naughtier is in may guys minds. Probably some would be disappointed f they ever watch the HC, but that’s what fantasies are.

I agree with You: non-hardcore models are much more liked by the Fans! I would be disappointed if Agnetis would do hardcore. If a woman decides to do hardcore and it´s a non-forced decision because of money or attention in the internet, then I have to accept this too. It wasn´t good that Emilia Boshe did hardcore with other guys as her boy-friend. She seemed not to be happy with that, but I think she did it for her upcoming baby. We all have fantasies, women as men. It´s okay to have them but it´s different from wanting constantly any… Read more »

To end this discussion. Every woman should be free in her decision and so it´s important to stop this hardcore wishing, because this shows not that You are fan, but that You do have problems, watching constantly hardcore ruins Your life! Show respect and be happy with what You get from women like Agnetis. Her pictures are hotter than any hardcore scene!

Thanks for the comments. Everybody has their own opinons. You are a very passionate fan and that is what matters. Regarding the rumors, I did not make them up. I was told that she had informal conversations with people that do hc, but that does not mean she was interested in that or was asked for it. Maybe it is just people talking or maybe it was a rumor made up by someone that claims to have inside info. The paradoz is that many people want something, but will feel betrayed when they finally see it. Look at Viola. Many… Read more »

Thank You too for the discussion about Agnetis. I agree with You that I´m a passionate fan and I simply find it always a bad decision if a topless model starts hardcore. As You said, mostly everything changes after that, for the model and for her true fans. It´s not because of sex, but we all know that these hardcore scenes are more work than joy, especially for the women. It´s not nice, that´s my opininion and I think that most porn actors will agree if being honest. Have a good night and thanks for accepting my opinions on hardcore.

it’s always great to have great discussions. not everyone agrees with the rest but showing opinions benefits us all. there are some girls who I’d love to see go hc but if I were them or their managers I would advice them not to as they can make more money .. less is more.. however not everybody understand the business side of it. take Jaynie Rae as an example. she is a star in the making. I would advice her to stay topless if I were his manager. she can mano thousands that way. obviously I would like to see… Read more »