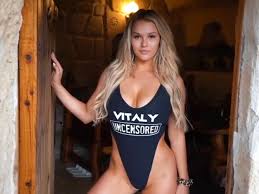 Busty model Kinsey Wolanski (Instagram https://www.instagram.com/kinsey_sue/) became world famous tonight after running in to the field during the champions League Final between Liverpool and the Tottenhum Spurs. Kinsey has gained over 700K followers tonight. Amazing. She is a blonde with nice tits. Check her out.

Kinsey Wolanski is the girl of the hour. All the newspapers around the world are posting about her. She jumped in the spotlight wearing a Vitai Uncensored onesuit. She did it to promote her boyfriend’s channel. This is not the first time Vitali uses her voluptuous girlfriend to get media attention. Check out below the video with Dan Bilzerian.

Here the video. She got thousands of followers. Her boyfriend, the youtuber Vitali promoted her spot. She wanted to be famous, she got it.

Another angle. Was she the highlight of the match?

From a new angel ? #UCLFinalpic.twitter.com/X2b0JjQ0E3

This one is a video about Dan Bilzerian offering 30 grand if she can stay on the tredmill for 5 minutes. She did not achieved her goal, but left us her boob bouncing

LOL I love it.
It took a smoking hot woman to make a game of soccer actually worth watching, even if it was for only a few moments.
I think Kinsey Wolanski has found her true calling – to run topless on to the worlds most boring sports arena’s around the world and brighten every ones day.
American football next please Kinsey.
Oh and BoobsRealm more Sunday fun.

Her boyfriend strikes me as a colossal douchebag. Most of these YouTube “pranksters” do.

Kinsey is so fucking hot and seems like such a sweetheart. I have no idea what she sees in him.

…That said, if I had a girlfriend that looked like that, I would probably act like a colossal douchebag, too.