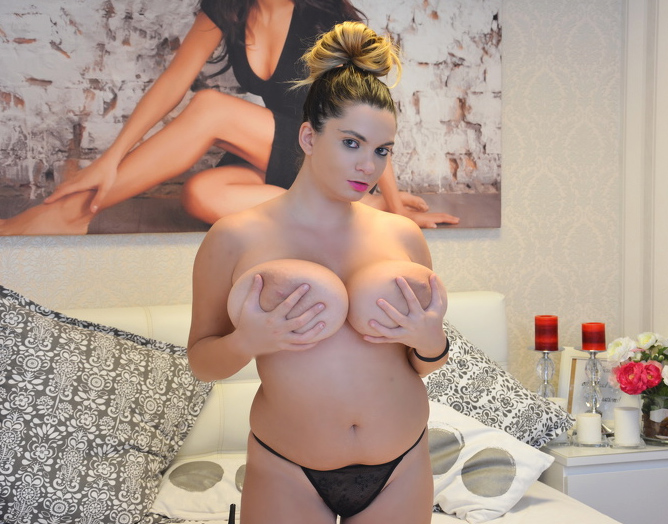 Long-time cam girl and nude model from Romania KittyCute confirmed her boy/debut on the XLgirls twitter. The site runned by Scoreland will feature her first hardcore adventures.

Kittycute has been featured on “released content” that features her topless, nude or playing with herself on sites such as Pinupfiles, XXcel , Yesboobs and of course Scoreland.

BoobsRealm reached out to the Romanian busty model. I have been in touch with her for years. We even discussed hardcore in 2020, but she cited being worry about backlash from family and boyfriend. KittyCute confirmed she is single and the offer was too good to reject.

KittyCute confirmed the hardcore has been shot already. I am guessing Score will release the content next Thursday or the following as at least this update will bring more eyes to the product considering that it is very important for fans that a solo girl jumps to hardcore. Sadly, this will give the illusion to many fans that other models will follow suit.

Kitty Cute has a message for all her XLGirls fans. We will be posting more details at https://t.co/G0NUJscEE3 next week.

At least a decent one shoot hc

Eh I’ve never understood this. The last thing I want is to see another bloke fucking a model I like.

Some fans do think as you do. Or at least the ones that complain more about a girl “being boring”

I don’t want to be negative, but her cam shows have been some of the most disappointing (I think I saw her flossing her teeth once and lots of phone scrolling). I hope her HC content has some spice, hopeful that those titties get handled the way they deserve.

I think it will be fine as Scoreland had their team there.
Oh man, she is a nice girl, but what you have seen on cam is nothing compared to other stuff .. SMH

Scoreland problem is models level of beauty not how scenes are shooted… they know their job. I think they have to treat different topgirls from ugly nobodies. I dont agree with the fact that shooting hc makes the girl is less interesting… i have all lucie wilde videos, i m pissed off they didnt shoot more videos. Even no hc ones. I think what matters is who we are talking about… Topgirls are topgirls, averege remain averege, mediocre remain mediocre

Has anyone asked her which man she filmed with? I will ask her on Onlyfans but havent got a response yet

Has to be a guy who works in europe. Probably someone new -inside joke-

Does the actress generally get to select the actor to perform with?

Thanks for forwarding what was on the scoreland blog.

If u werr onlyfans of models you would be paying 50 for 1 minute. Come one. Don’t be cheap

I totally disagree with harold professional boy girl is cool i would pay for it. But i dont pay for stupid only fanner. This only fan shit is a poison that is ruining boobworld… The problem is the girls that are actual tops cant match the tops of 5 years ago and dont do boygirl but shitty onlyfanner that i will never pay for it . i hope more girls like kitty cute does boygirl for one big site and ill subscribe for it dor sure

Please when you subscribe for xlgirls to watch it use my link.. I will help the blog and fund more shoots
Boobsrealm.com/go/xlgirls

It looks as though the release will be tomorrow. A few pictures on the site, those big titties getting sucked? Its just so fucking hot!

Probably as they usually release before the weekend

[…] previously announced by Boobsrealm KittyCute made first hardcore  for XLgirls. For the fans of the very curvy Romanian this is big news. Watch the trailer […]