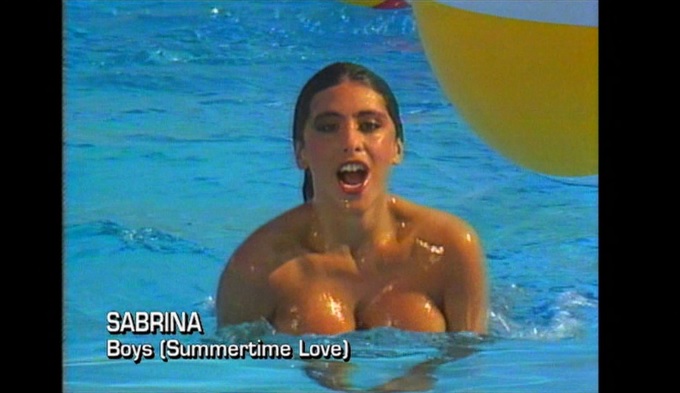 Viola Baileys seems to be the girl of the month. After her long-awaited Double Penetration scene has been released. Viola made a cameo on a Latvian band’s video. So I take this opportunity and present you some big tits-music-related girls and videos. Meet Sabrina from the late 80’s, South American Giuliana Rengifo and popular russian Angina.

Speaking of videos and boobs. If you were born in the 80’s you may remember Sabrina. This busty One Hit Wonder was all over the place all over the world. Maybe the first girl that gave me a boner in 1987 (yep I was 6 LOL). This was madness! Basically me and my school friends watched that video many times expecting to see her boobs every one of them. Makes no sense, but.. hey some kids believed in Santa, I believed in Jingle Boobs. At that time I didn’t know any damn word of english. Hell, I even didn’t know my own language well, but I learned “Boys, Boys, Boys”.

It doesn’t matter if you don’t speak Spanish. You will learn with this teacher.

Last but not least Angina. Nadia Igoshina has been featured on BoobsRealm.com before. In fact, Nadia’s previous post has been one of the most visited articles on this blog. On this link also you can watch Nadia Igoshina naked tits and another video of her making out with another hot girl on car.

And this is how these kids discovered puberty!

For those wondering what is up with Angina. She was part of a Reality Show in Russia to find the next superstar. The song she sings is called ” Who cares?” We care about those tits! Below another nadia Igoshina video. This time she wears more clothes on. Aren’t russians the hottest girls on Earth?

I felt the same. Viola in a music video is great but the band and that song were shit. No wonder Latvian music has never seen a worldwide hit.